In trying to find some explanation for some MS SQL 2012 settings, I came across this video that I found useful, maybe someone else will find some value as well.

I recently purchased an HP 15-db0082nr laptop from TigerDirect when I was looking for a low-priced unit. The most effective upgrade for any laptop with a traditional hard drive is to swap it for a solid state one. Unfortunately, my Google-Fu skills did not yield any results when attempting to find a video on YouTube or a repair manual anywhere else online to attempt the upgrade without breaking anything. 👀

I ended up attempting to disassemble it and figured I'd take a couple of pictures to show what you need to be on the lookout for. You'll need a small phillips screwdriver and either a plastic tool or credit card to separate the plastic cover without damaging it. I definitely do not recommend that you use a flat head screwdriver for this stepor you can risk damaging the cover. As you might be able to see, there are 10 screws total that you will need to remove. Unfortunately 7 of those are hidden under the rubber strips under the laptop. These are attached some double sided tape so be very careful when removing it. 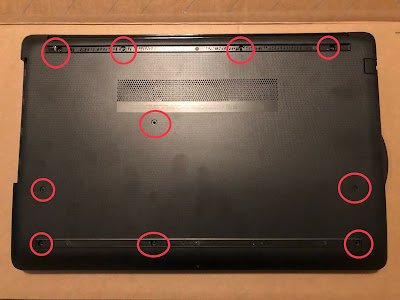 Replacing the HDD with an SDD is pretty simple, just remove some screws to detach the mounting bracket and replace the drive. You'll also need to remove the optical drive before taking apart the cover. Another thing you will notice is that this laptop only has one DIMM so you simply cannot add another stick of RAM, but that's to be expected with a laptop in this price range. 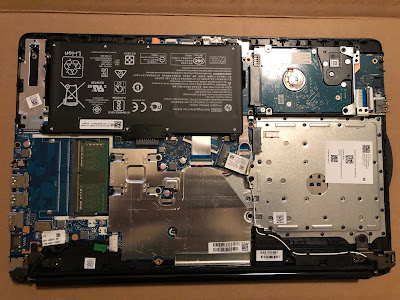 While these are not step-by-step instructions, I hope they help someone that might be in the same situation I was in.
Posted by Tony B at 4:19 PM No comments:

I recently upgraded our vCenter environment to version 6.7 Update 1 and started noticing that Update Manager related tasks and windows were not displaying and instead a red banner with 401 response error kept coming up. Unfortunately I was unable to find any resolution when the issue first came up, but more recently I found that it only manifests itself if you use Firefox as your browser of choice, which is in fact the scenario I've been facing.

VMware suggested workarounds:
A fix should be upcoming, until then, those are your possible solutions. Source: VMware KB59696
Posted by Tony B at 4:05 PM No comments:

I recently came across a tool to optimize your desktop OS as long as it is Windows 7 or newer. This tool does not support server OS, so take that into consideration. Also, this tool is built primarily to optimize virtual desktops, so double check any changes on a physical desktop if you decide to use it for that purpose.

Joining Active Directory with vCenter Server Appliance (VCSA) has been simplified with every generation of VCSA, instructions to joining VCSA 6.7 to AD can be found at Elasticsky's site.

I recently replaced my iPhone 6 with an iPhone X and I finally decided to add some of my music collection over to it. Since I keep all my media on a NAS, I do not have any libraries listed under iTunes. I've always managed my music on the iPhone separately. I'm used to dragging and dropping albums onto my device.

For whatever reason when I did that earlier, it was not grouping songs as albums OR listing the artists. I had a hot mess with all the songs listed individually and not being able to sort by album or artists is definitely not ideal. My Music app looked something like this:

Those are all songs from the same album, which ideally should just show the album name, not every individual song. The other thing is if you looked under albums, each song was listed individually, all with the same album name. If you looked under artist, the artist name was NOT shown on the list. I found a workaround, and while not ideal or pretty, it seems to work every time. Instead of dragging and dropping the complete album, I copied over one song, then a second one, and that grouped them together. At that point, you could copy over the rest of the songs and they were listed under one album. It seems to be a hit-or-miss if you copy over the complete album so I have just gotten in the habit of copying over a pair of songs first.

As shown on the last picture, that was the expected behavior. All the songs are now under one album and the artist is also listed under the library. Hopefully not too many people are experiencing this issue, but just in case, I hope it can help someone out.
Posted by Tony B at 4:25 AM No comments: